How does a bankrupt country pay for losing a war? Archive documents from the University of Edinburgh, School of Chemistry cast a fascinating light on a short-lived attempt to resolve this conundrum. By Peter Fuller

How does a bankrupt country pay for losing a war?  Archive documents from the University of Edinburgh, School of Chemistry cast a fascinating light on a short-lived attempt to resolve this conundrum. By Peter Fuller

Archives of the University of Edinburgh detail the purchase of precision balances and Bohemian glassware from Bonn, in 1920 and 1921.  The letters, written by Professor James Walker, the Chair of Chemistry responsible for the Kings Buildings Chemistry building, show that the German supplier was required to pay money back to the purchaser, under the German Reparation (Recovery) Act 1921

"Subject to the provisions of this Act, after the thirty-first day of March, nineteen hundred and twenty-one, on the importation into the United Kingdom of any German goods to which this Act applies, the importer shall pay to the Commissioners of Customs and Excise (herein after referred to as the Commissioners) such proportion of the value of the goods, not exceeding fifty per cent., as the Treasury may from time to time prescribe" 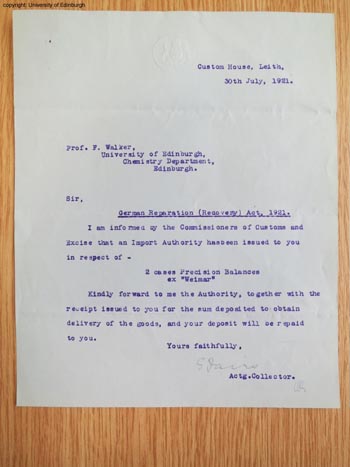 The balances were bought from C Gerhardt, a family firm still trading in laboratory equipment and analytical systems today.

This scheme quickly failed, as receipts to Britain became disproportionately large compared to money returned to the other Allies.  This problem is reflected in one of the archive letters, which alludes to a date after which receipt of such extra payment may become problematic.

These purchases were part of consignment of goods transported from Hamburg on the SS Weimar, a Leith-built cargo ship from 1889 with a capacity of 1580 tons, which remained on the Leith/Hamburg run until she was broken up for scrap in 1933.

Ultimately, of course, the War Reparation scheme proved unworkable, and despite various attempts to alleviate the problem, such as the Dawes Act of 1924, where in order to combat hyperinflation the German government was loaned money by the U.S.A in the short term so that it's economy could get some relief, however the issue with this was that any negative impact on the American economy would have a domino like effect on the German economy, as was seen after the wall street crash of 1929. The lack of financial resolution ultimately contributed to the rise of Nazism and arguably, the Second World War.