The plans to build what would eventually become The King's Buildings were put on hold at the outbreak of the War.

The plans to build what would eventually become The King's Buildings were put on hold at the outbreak of the War. The work of the Chemistry Department in the production of high explosives at a commercial scale led to James Walker, the Chair of Chemistry at the time, receiving a Knighthood for his war efforts.

After the war was over, many soldiers sought to return to study, and one of the University departments that saw a large influx in students was Chemistry. So, the original 1913 plans for a new Department of Chemistry were implemented, with the building process beginning in 1919.

Photograph of the Joseph Black building in the 1930s.

Over the course of the past few months we have found some very interesting invoices and receipts from the early 1920s, when the finishing touches to the Joseph Black Building were taking place. One peculiar example is asbestos: a material that has since plagued renovations to the building.

Photographs showing invoices for purchases of Blue and White Asbestos.

White asbestos, the mineral chrysotile, is a carcinogen, and although it is the most common type of asbestos, it is still very dangerous. It has been shown by many clinical studies that white asbestos causes various cancers including lung, larynx and intestinal cancers.  Blue asbestos, crocidolite, is the most dangerous type. Its ultrathin fibers mean that when airborne it is extremely easily inhaled, and doesn't easily break down. This is the main cause of mesothelioma.

Since the erection of the Joseph Black building, several pockets of asbestos has had to be removed from the building for its threat to safety. The Cape Asbestos Company, although still in business as Cape plc, has since paid out compensation to sufferers of asbestos-related health issues in the UK and in South Africa.

An unusual point of interest comes from discovery of receipts from the festive season of 1920, recording purchasing of sustenance from a local baker J. Ramage & Son for workers moving equipment into the Joseph Black building. 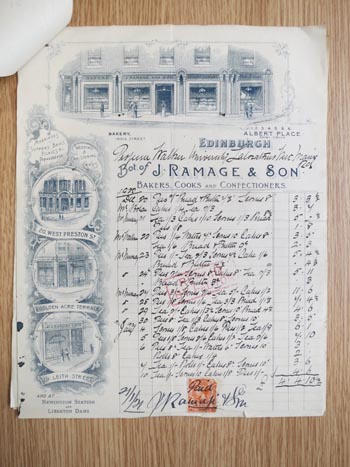 Receipt for cakes and tea for removal workers, also showing the period of the move.

As can be seen in this receipt, the workers were moving in equipment over the New Year, taking breaks over Christmas and New Year's Day. They bought tea, cakes and scones for themselves, and charged the University for their troubles. Many of the locations of J. Ramage bakeries, as seen in the invoice, are still standing throughout Edinburgh: one (Goldenacre Terrace) is a family owned optometrist, and another (West Preston Street) is now a William Hill betting shop.

After the relatively smooth process of moving into the new buildings, the Department was opened to the public in December 1924 and, notwithstanding asbestos removal and significant architectural additions since, it remains easily recognizable as the 1920 original, in which cake and tea continue to be consumed in large quantities.