For our first academic talk in two years, Edinburgh University Chemistry Society is excited to invite Professor Marcel Jaspars to talk about his work in biosynthesis and his spin out “GyreOx” which uses innovative technology to build highly modified macrocyclic peptides.

Cyclic peptides are peptides which have been looped around and connected to themselves, thus forming a cycle. These molecules are of great interest as therapeutic candidates as they can target a very large variety of sites (everything from ion channels and GPCRs to protein-protein interactions), and they do not follow Lipinski's rule of five, which traditionally limits the potential for small molecules to act as drugs. Cyclic peptides are rather complicated structures to synthesise, but Prof Jaspars, during his research, has found a biological system that can do just that. It is this technology that has formed the basis of his spinout “GyreOx”. 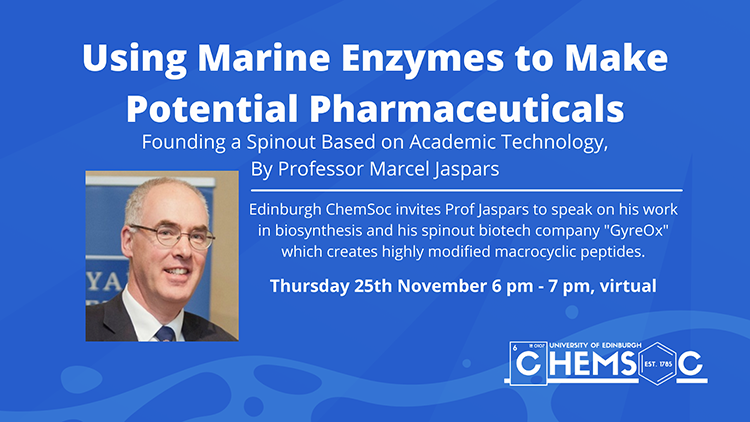 Dr Marcel Jaspars received his PhD in 1992 from Trinity College, Dublin, Ireland and his ScD from the University of Cambridge in 2018. Marcel Jaspars’ main expertise is in the discovery, characterisation, utilisation and biosynthesis of marine natural products, training with Professor Phil Crews at the University of California, Santa Cruz. Marcel has frequent contact with people operating at all stages of the marine biodiscovery pipeline, from the collection and identification of the organisms to their testing in whole animal models.

Marcel founded the interdisciplinary Marine Biodiscovery Centre at the University of Aberdeen in 2010, a £2.5 M investment to focus on marine resources for novel pharmaceuticals, and to investigate fundamental questions in chemical ecology and biosynthesis. The Centre contains facilities for chemistry, chromatography, spectroscopy, molecular genetics and microbiology.

Some of his work on biosynthesis has been spun out as a start -up company to discover medicines for complex diseases (www.gyreox.com). Marcel has been active at national and international levels to develop the science, its applications/industrial uptake and associated policy involved in marine biodiscovery and biotechnology. He provides scientific advice to the UK, EU and UN for global policy processes on ocean conservation via reports, papers and taking part in discussion meetings. More recently he has been involved in providing a definition of digital sequence information, a topic being discussed under the Convention on Biological Diversity.