Professor Knox was a remarkable man who obtained a BSc (1st class hons) in Chemistry from the University of Edinburgh in 1949 and a PhD from Cambridge University. He returned to a Lectureship at Edinburgh in 1953 and remained with us until his retirement.

Many of us will remember him as an approachable, kind and supportive teacher. What we may not have realised is that he is also regarded as the most distinguished Physical Chemist of his generation in Scotland. He was a world authority in the field of separation science and a pioneer in the development of modern high performance chromatography. After his retirement, inspired by his love of sailing and a few ‘adventures’, he developed the AnchorWatch device and designed the ‘Knox anchor’ that is now commercially manufactured.

Alumni, staff, students and Knox family members joined together on Saturday 9th November 2019 in the Joseph Black Building to celebrate the life and legacy of the exception Prof. John H. Knox. The symposium consisted of a series of presentations spanning John’s life, work and scientific legacy.

The programme of the day can be viewed online.  It was a fascinating day of reminiscing and learning more about a great man and his scientific legacy.

We first heard from two of John’s four sons who told of the many hair-raising exploits they enjoyed as young boys and spoke of John’s many inventions (some more successful than others) as well as his silversmithing skills. This provided an excellent start to the day and left the audience wondering how all four sons survived to adulthood.

We then heard about some of the sailing adventures that John shared with two colleagues, Malco lm Fluendy and Bob Baxter, that, in John’s “retirement”, led to the very successful inventions of the AnchorWatch device (a pre-GPS device to monitor anchor strain and warn of imminent anchor dragging) and the Knox anchor. Later in the day Geoff Crowley and Catriona Graham (John’s granddaughter) from the Knox Anchor company gave us insight into how John’s scientific approach to the problem of safe anchorage (with the help of his wife Jo and many visits to Longniddry beach) led to the commercialisation of a new type of anchor with the highest holding force per weight of any commercial yacht anchor. 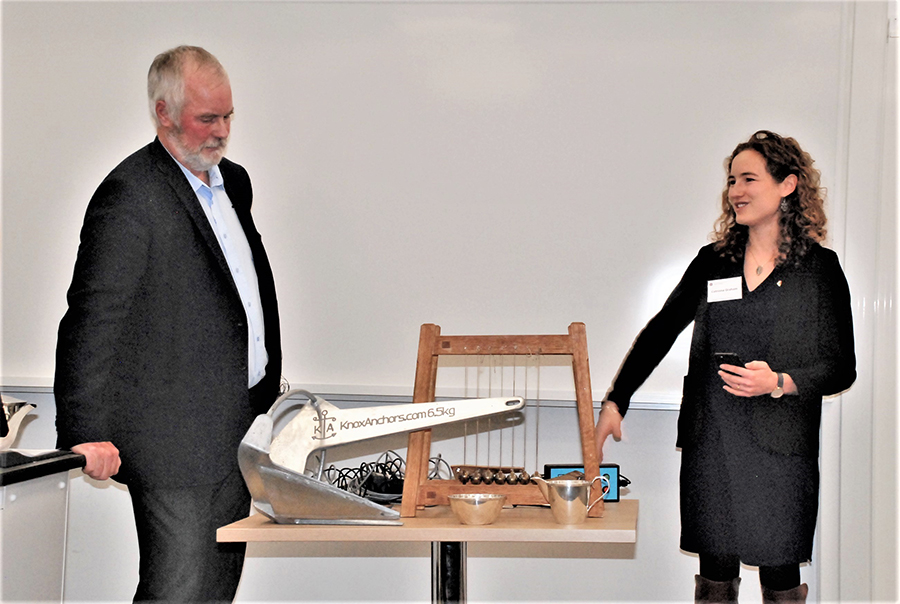 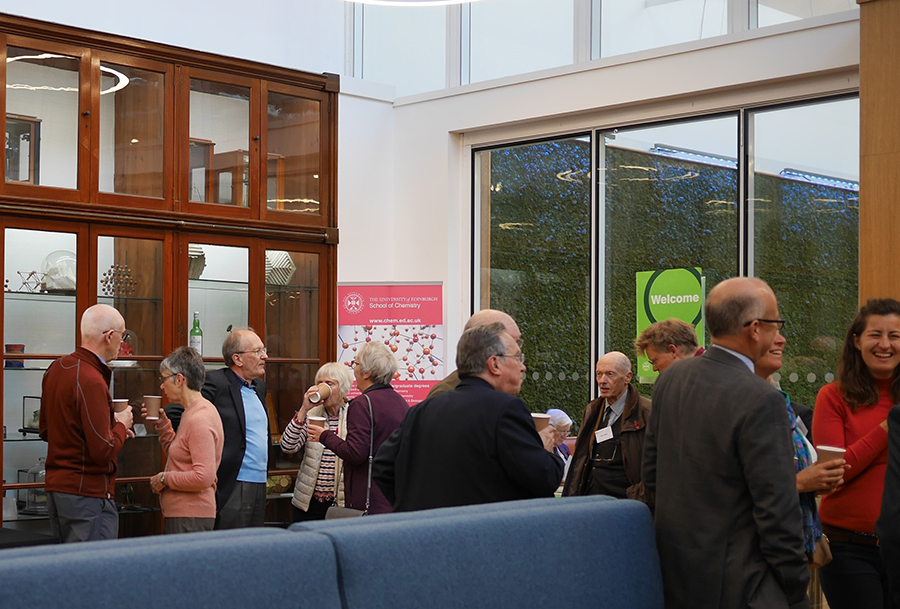 Two former PhD students (Forbes McLennan and Bob Boughtflower) highlighted his role as teacher and mentor, explaining the famous Knox equation. Prof John Langley from Southampton University talked about his wider scientific legacy and the impact he had on the current generation of world-leading researchers in the field of chromatography with testimonies from all of the winners of the RSC Separation Group Knox Medal. The afternoon came to a close with two excellent presentations from current members of staff: Dr Nicholle Bell (“Unravelling the World’s Most Complex Mixture”) and Prof. Neil McKeown (“Polymers of Intrinsic Microporosity”) followed by chatting over posters displaying current research in the School, lubricated by refreshments, and tours of the building. 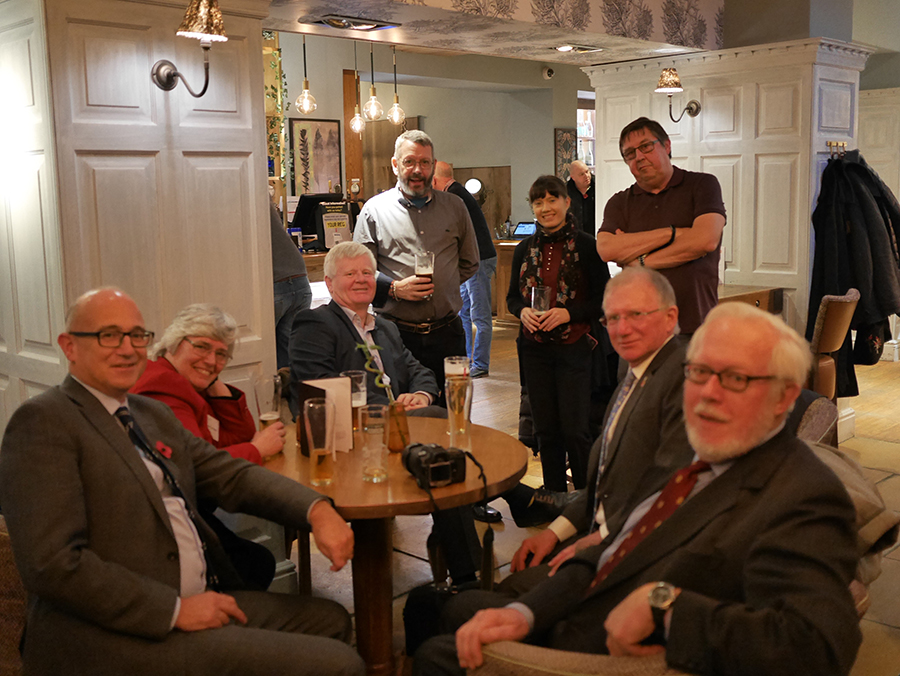 Some of the participants joined the Knox family for an enjoyable dinner in the evening at the John McIntyre Centre, Pollock Halls that gave more opportunities for catching up with old friends and making new ones.

Everyone thoroughly enjoyed the inspirational day and those of us lucky enough to have experienced John as a rather unassuming but supportive teacher of kinetics or thermodynamics came away with a much greater appreciation of his humanity, inventiveness and amazing scientific legacy.

My early interest in Chromtography (C) arose from my work on this kinetics and mechanism of gas phase reactions where GC proved to be an ideal analytical method, Very soon I become interested in the kinetics of C and developed a theory for maximising the speed of separations by C. This led to more detailed studies of how band spreading occurred and how it could be controlled. In 1972 I was awarded a major grant by the Wolfson Foundation to set up a unit to exploit our expertise in LC with industry. This led to the development of the Hypersil range packing materials for LC by Shandon Scientific Ltd. And most recently Hypercarb – a porous form of graphite. Along with my co-workers I have contributed to the understanding of preparative LC, ion pair LC and size exclusion LC. We are currently working Capillary Electroseparation Systems and applications of Porous Graphite in LC.

Prof. John Knox was born in Edinburgh and graduated from Edinburgh University with a First Class Honours BSc in Chemistry in 1949. He then obtained a PhD from the University of Cambridge (Pembroke College), working with Prof. R.G.W. Norrish on the mechanism of low temperature combustion of propane. While doing his PhD he recognised the potential of gas chromatography and on his return to Edinburgh University as a young lecturer in 1953 he applied chromatography to the study of reaction kinetics.

John pioneered the application of gas chromatography to gas kinetics and subsequently made significant contributions to the elucidation of the mechanism of the slow combustion of hydrocarbons and of the role of vibrationally excited free radicals in the chlorination of olefins.

In 1964 the Knox family moved to Utah for a one year sabbatical with Calvin Giddings where John was introduced to liquid chromatography which became the focus of his later research activities. He is particularly noted for initiating new work on band-spreading mechanisms in chromatography, which had an important effect on the development of high-performance liquid chromatography (HPLC) over the next decade.

His work in the sixties on the optimum packing materials for HPLC columns led to the widely recognised Knox equation for comparing the performance of HPLC columns. In 1972 a major grant from the Wolfson Foundation led to the establishment of a unit for the development of HPLC in Edinburgh and in 1974 he was promoted to a Personal Chair in Physical Chemistry. The Wolfson Unit produced a number of new HPLC support materials including the commercially successful Hypersil (new micro-particulate packing materials for liquid chromatography) and Hypercarb (an entirely new packing material - porous graphitic carbon, creating an alternative packing material to silica gels). It is the only porous graphitic material which has become commercially available.  John retired in 1984 but continued as Director of the Wolfson Unit until 1992. John was a keen yachtsman and his many sailing adventures led to the invention and commercialisation of the Anchorwatch, a strain gauge which measures the force on an anchor chain, in order to alert crew when their anchor is at risk of slipping during a stormy night. The Anchorwatch established a testing procedure for measuring an anchor’s holding force. Years of experimenting on Scotland’s beaches (and some further afield) culminated in the successful launch of the Knox Anchor now commercially manufactured in the UK.

For many John is recognised through the Knox equation:
h=av1/3+b/v+cv
This, with the van Deemter equation, is widely accepted and used to describe the dependence on plate height on linear velocity of the mobile phase.