Spectroscopy in a Suitcase Takes Part in Biocity On the 2nd of September members of the Spectroscopy in a Suitcase (SIAS) team took part in the BioCity event at the Perth High School, which involved delivering workshops on the IR and UV-Vis to 360+ pupils from 12 to 17 years of age.

The IR session led by Sam Stanfield, an Optima CDT PhD student who is enthusiastic about public engagement, involved chemical identification of visually indistinguishable pills crushed to white dust (four different over-the-counter drugs: Paracetamol, Aspirin, Ibuprofen, and Loratadine). From the molecular structure of each drug, along with a table assigning the wavenumber values of functional groups, students had to work together to predict the spectrum of each drug. Following that, students took a measurement (via volunteer participation) and match this to the peaks in the spectrum. 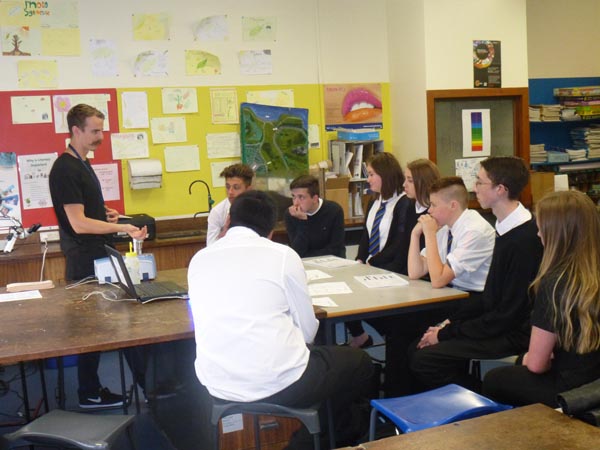 The Ultraviolet ??? Visible Spectroscopy activity, led by Anna-Maria Maciejuk, involved prediction of which wavelengths will likely to be absorbed by a food colour dye. Students were given a task of predicting the colour absorbed and also reflected by the substance. The colour wheel was used as a primary demonstration, where complementary colours are opposite each other. Students then had an opportunity to use pasteur pipettes, cuvettes and UV-Vis to mix food dye colours and predict the readout.

Both activities were hugely popular between students. While younger pupils were more eager to volunteer to be involved in taking measurements, older students focused more on the theory behind the techniques and the instrumentation. They were also interested in university life and how is it like to study chemistry and science-related disciplines at the university.