The focus of our research is in the application of synthetic coordination chemistry to a number of contemporary research areas such as artificial molecular machines and motors, and multifunctional self-assembled systems. We have recently discovered a cyclometallated platinum coordination motif which reveals/masks cis coordinating groups in response to pH changes.

This has been exploited to create metallosupramolelcular systems which assemble in the presence of acid and disassemble when treated with base. We are currently exploring ways of linking this responsive behavior to other functions such as catalysis, sensing or transport. Using similar compounds, we have also shown it possible to control both the kinetics and thermodynamics of ligand exchange using light and proton inputs, which we anticipate will play a key role in the development of future devices such as molecular machines. 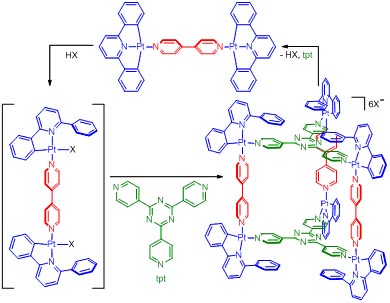 For a full list of publications and more information about the Lusby research group please see the group's website.