Our two areas of research interest are linked by the common theme of designing new ligand systems from first principles in order to define the steric and electronic characteristics of metal complexes with applications in catalysis. We are applying these principles in two different areas of catalysis as follows.

The application of C3-symmetry in asymmetric catalysis at octahedral metal centres. The use of chelating ligands with C2-symmetry in combination with square-planar metal centres [Rh(I), Pt(II) etc.] is well established. The C2-symmetry is complementary to the square-planar geometry and provides two homotopic (equivalent) chiral sites at which the catalysis can occur. However, to achieve homotopic chiral environments in an octahedral complex a ligand with three-fold (C3) symmetry is required to tripodally coordinate to the metal. This approach has received very little attention, principally because of the difficulties involved in synthesising the required tripod ligands. We are exploiting the helically twisted structures which are formed on coordination of tripod ligands such as hydrotris(methimazolyl)borate to octahedral metals to achieve the required C3-symmetry and have developed a new synthesis of such ligands which allows us to introduce chirality into the ligands so as to form single diastereomer complexes 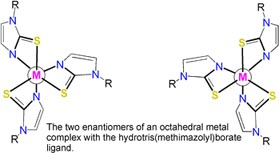 Alkene polymerisation by square-planar zwitterionic late transition metal complexes. Polymerisation of simple alkenes by cationic square-planar Ni(II) and Pd(II) alkyl complexes containing chelating ??-diimine ligands is well established. However, the presence of a positive charge on the metal introduces a number of problems resulting in the formation of highly branched polymers. These catalysts also only produce long chain polymers if the metal centre is highly shielded by ligand substituents. We are employing a novel ligand system which is capable of localising a negative charge remote from the metal and this allows for the formation of charge-neutral catalyst complexes retaining positive charge at the metal centre. This design provides polymerisation catalysts with distinctly different properties from existing catalysts and we are exploring the possibilities which this allows in alkene polymerisation.