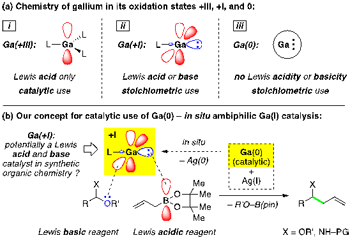 Recently, we have developed the first catalytic use of Ga(0), which relies on a mildly oxidizing Ag(I) co-catalyst (Scheme 1) [1]. Crownether ligation and ultrasonic activation have proved to be critical to the catalyst's activity. Ga(I)-catalyzed C-C bond formations between allyl or allenyl boronic esters and acetals, ketals, or aminals have proceeded in high yields with essentially complete regioselectivity and chemoselectivity. NMR spectroscopy has revealed novel transient Ga(I) catalytic species, formed in situ through partial oxidation of Ga(0) and B-Ga transmetalation, respectively. These unique features clearly distinguish our work from Ga(II) chemistry. Likewise, in contrast to Ga(I), other metal triflates including Ga(III) have proved to be catalytically inactive. The possibility of asymmetric Ga(I) catalysis has been demonstrated. This new scalable method is a rare example for ultrasonic activation in catalysis, and may open up a new field in organic synthesis.

More recently, we have also discovered a sodium amide-triggered C(sp3)-H bond activation of alkenes under mild conditions (Scheme 2-iii) [2]. The resultant nucleophilic allyl Na species in contrast to the state-of-the-art (Scheme 2-i & ii) was exploited in C-C bond formations with imines, which proceeded in high yields with complete regioselectivity and excellent geometric selectivity. Aromatic cyano, chloro, and bromo functionalities have proved to be tolerated by the transition metal-free catalyst. Complex amines bearing a C=C double bond and distinct heteroaromatic units were prepared in a single step. The critical importance of Na vs. other s-, p-, d-, and f-block metals as well as metal-free systems has been revealed. Two catalytically active sodium-based intermediates were detected by 1H, 13C, and 23Na NMR as well as HRMS analyses. The possibility of an asymmetric version of this novel reaction has been demonstrated. This new method is a rare example for the catalytic use of a sodium amide in C-C bond formation, and will impact the fields of organic synthesis, main group metal chemistry, and earth-abundant metal catalysis.

These under-explored catalysts are exploited in C-H/C-C/C-X bond activation and small molecule activation.