The thing I remember most about Chemistry in Edinburgh in the 1970's was the sense of hearing lecturers talking about their own new work and how ground-breaking some of that was. The other thing I should probably mention is that I met my wife there! 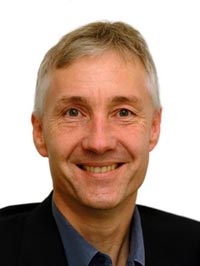 The lecturer who had the strongest impression on me was probably Professor Evelyn Ebsworth. I recall him climbing onto the lecture bench and jumping off it to demonstrate quantisation of energy levels. 'I'm either here or here, I can't be in between' he would shout as he jumped!

The main job opportunities for PhD chemists in those days were in the big chemical companies, the pharmaceuticals and the oil companies. I was hired by BP in their labs at Sunbury, near Twickenham in SW London. Most of Sunbury was doing fairly 'blue-sky' work looking for technology-based new business opportunities but I ended up in the more traditional area studying lubricants. The performance and degradation of lubricants is very much driven by chemistry: the interaction of the mineral components, various chemical additives and free radicals generated in use, particularly in engines.

At Sunbury the combination of an urgent problem (we couldn't make good lubricants from North Sea crudes), and new analytical techniques meant we got important results very fast. In 3 months I had more answers than in the 3 years of my PhD. Some of the work involved correlating composition and performance using multiple regression analysis facilitated by 'new fangled' HP85 computers. By 1985 our correlations were saving the company around $5-10m per year in performance optimisation and claim reductions.

In 1993 I founded my own consultancy, KKI Associates, which does consultancy (largely in commercialisation and knowledge transfer), training (typically commercial skills for people with a science or technical background) and mentoring (largely helping young people who are starting businesses. In the early 1990's this work was largely in Eastern Europe, in countries including Slovenia, Sweden, Romani and the Ukraine.

Since 1997 it has mostly been in the UK, particularly Scotland, as Universities here became more interested in commercialisation. A couple of years ago when I redesigned my web-site I realised that I have personally carried out 250 commercialization assignments since 1994 and trained over 2500 people in the area. Pleasingly, some of the people I have helped have gone on to form 20 spin-out companies, including some of the most successful in Scotland, creating over 200 jobs. One of the best endorsements on the web-site is from a successful entrepreneur who is known not to suffer fools gladly; he basically says 'I hate consultants, but Kevin's not too bad actually'!

My latest project has brought me full circle back to Edinburgh University School of Chemistry. I am co-operating with Professor Colin Pulham in developing commercial skills modules and course work for undergraduate chemists. We hope this project will have a big impact on undergraduate employability, not just for Edinburgh graduates but for chemists around the UK.

I have never regretted becoming a chemist, I use chemistry a lot in my work, and am still fascinated by chemical problems. Last year I had a great example. I was asked by a 'City type' to compare the amount of oil spilt by BP in the Gulf of Mexico, with the amount of oil lost from US tankers during the worst period of the U-boat campaign in 1942. He was thinking that the Gulf did recover from the war, so it might indicate the long term effects of the 2010 spill. The answer was fascinating, and if anyone wants to do the calculation and compare it with my answer I'll be pleased to compare notes with them!

Outside work my interests are working with young people (I'm a Cub Scout Leader and a volunteer with the Princes Scottish Youth Business Trust), playing folk guitar in various Edinburgh Pub sessions, and War Gaming. I regard myself as being extremely fortunate to be able to make a living doing more or less what I want, and therefore do my best to stay cheerful even in the dark Scottish Winters!