New research selected as a hot paper and research highlight 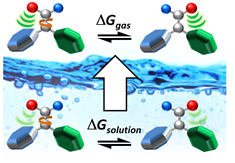 The Cockroft group, working in collaboration with Syngenta, have tackled this challenge by measuring H-bond energies through changes in the shape of compounds known as molecular balances (see Figure). The molecular balances were designed to form an internal H-bond when in a folded shape, but to break the H-bond when unfolded. The ratio of folded to unfolded molecules was then determined using NMR spectroscopy to measure the strength of the internal H-bonds and the associated solvent effects; crucially, even in competitive polar solvents. Finally, the researchers found that they were able to mathematically dissect away the energetic influence of the solvent by applying a simple solvent model developed by Prof. Christopher Hunter.

The work was selected as a ‘hot paper’ in Angewandte Chemie, and featured in a research highlight in Nature Reviews Chemistry, ‘Weighing up solvent effects’ .