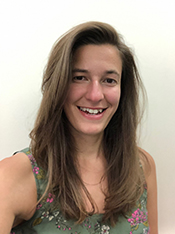 Congratulations to Zoe Gidden, who has been awarded a Sir William Darling Memorial Prize of £1000. Zoe joined the Horrocks lab as a PhD student in the EASTBIO (East of Scotland BioScience) Doctoral Training Partnership and is co-supervised by Dr Mathew Horrocks and Prof. Lynne Regan at the School of Biologicial Sciences.

Zoe is now working on developing a new method to fluorescently tag proteins in mammalian cells, so that they can be imaged via super-resolution microscopy, while minimising the effect on the normal function of the protein.

Traditionally the Sir William Darling Memorial Prize is awarded by the Principal to an individual or group of students who have done most to enhance the reputation of the University. Zoe has done this firstly through her role on the University swim team, which has resulted in her winning multiple events:

In addition to her sporting achievements, Zoe has also enhanced the reputation of the university by delivering several exemplary talks to a variety of different audiences. In September, along with researchers from universities across Scotland, Zoe participated in the “Explorathon 2021 Science in our Lives” event by giving a well-received Pecha Kucha presentation about her research to a lay audience. This presentation style, consisting of 20 slides each lasting 20 seconds, challenges the presenter to carefully consider the content and choice images. Zoe put together a creative and engaging presentation which can be viewed online.

Zoe has also represented the ESMB, presenting her work at the Biophysical Society Annual Congress in San Francisco earlier this year.

I'm delighted that Zoe's contributions to enhancing the reputation of the university have been recognised by this award. Alongside her success in the laboratory developing a new kind of super-resolution microscopy, Zoe somehow finds the time to participate in and win national swimming competitions! She has also showcased her work to biophysicists around the world and the general public.

Zoe is working on developing a new way to fluorescently label proteins in living cells to enable them to be imaged at really high resolution, while also maintaining their normal function. She is particularly interested in applying this method to further understand how the protein TDP-43 is involved in causing the neurodegerentative disease ALS. Knowledge of how this protein functions in living cells could be the key to the development of novel therapies to treat diseases like ALS.

I am both surprised and honoured to have been selected as one of this year’s recipients of the Sir William Darling Memorial Prize. Whilst I am proud to represent the University of Edinburgh to the best of my ability both academically and in the pool. I am also very grateful for the enthusiastic and committed support of my PhD supervisors, Prof. Lynne Regan and Dr Mathew Horrocks; my coach at UoE Performance Swimming, Jenn Davis; and my funders, EASTBIO, without whom none of this would have been possible.