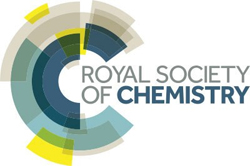 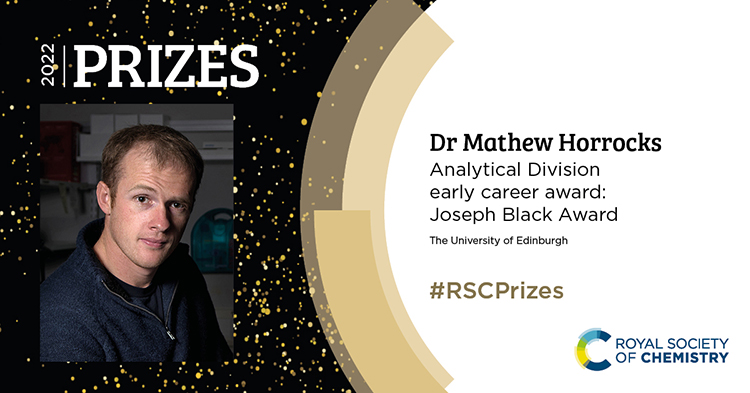 Dr Mathew Horrocks has been named winner of the Royal Society of Chemistry’s Joseph Black Award. Based at the University of Edinburgh, Dr Horrocks won the prize for the development and application of single-molecule and super-resolution microscopy approaches to understand how proteins aggregate in neurodegenerative diseases.

I am absolutely thrilled to have received the Joseph Black Award. It's a huge honour to have my work and that of my research group recognised.

There is a pressing need to further understand neurodegenerative disorders, and this prize raises awareness of the contribution analytical chemists can make to this field. The contribution recognised has only been made possible by the amazingly talented students and post-docs working on this, the many collaborators we have, and the organisations who fund us, including UCB Biopharma, the Royal Society, Alzheimer’s Research UK, the Rosetrees Trust, and the University of Edinburgh Chemistry Alumnus, Dr Jim Love.

Neurodegenerative disorders affect 850,000 people in the UK, and with an ageing population, this number is expected to rise to 1,000,000 by 2025. In addition to the major personal burden of these diseases, each year dementia costs the UK an estimated £26 billion, a number which is also expected to increase. Of these disorders, Alzheimer's and Parkinson's diseases are the most common. Both diseases can only be diagnosed clinically based on patient symptoms, with confirmation post mortem. There are currently no suitable biomarkers, which is a result of a shortfall in the technologies sensitive enough to detect potential targets. The lack of an early diagnosis also limits the development of therapeutic interventions. By the time the symptoms become evident, much of the damage in the brain has occurred, and this is currently irreversible.

In both diseases, small protein clumps – called oligomers – form in the brain and are difficult to study due to their structure and size. Mathew has spent his research career developing powerful microscopy methods to see and characterise these disease-causing agents.

This research is increasing our understanding of how oligomers are formed, how they cause damage, and how cells respond to prevent damage. 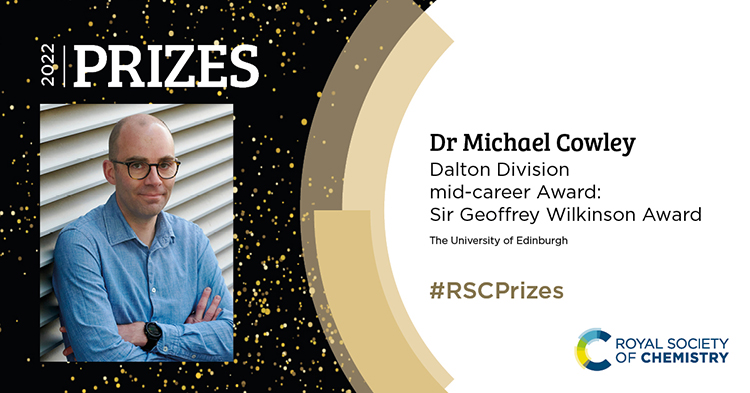 Dr Michael Cowley, who grew up in West Sussex and now lives in Edinburgh, has been named winner of the Royal Society of Chemistry’s Sir Geoffrey Wilkinson Award. Based at University of Edinburgh, Dr Cowley won the prize for advances in reactivity of and catalysis of aluminium compounds.

I felt proud and excited that the work of many people in my research group over the past 5–10 years was being recognised in this way. Now I am back to thinking about what is coming next.

The award is a great addition to the best prize in science, which as Feynman said is ‘The pleasure of finding things out’

Dr Cowley is interested in developing new chemical compounds and new reactivity of some of the most abundant elements available on earth. Aluminium – which his group studies – is one such element. It’s the most abundant metal in the crust of our planet, and the only part accessible to us. His group studies the fundamental chemistry of aluminium to develop new types of chemical compounds, and new types of reactions. By putting aluminium atoms in their compounds into 'uncomfortable' bonding situations with the atoms that surround them, they can make the metal react in new, unusual, and potentially useful ways.

The group believes that the knowledge they generate and discover about the chemistry of aluminium and other abundant elements will eventually allow us to make the chemicals we rely on in our everyday lives – like drugs, plastics, electronic displays, and other technology – in a sustainable way. 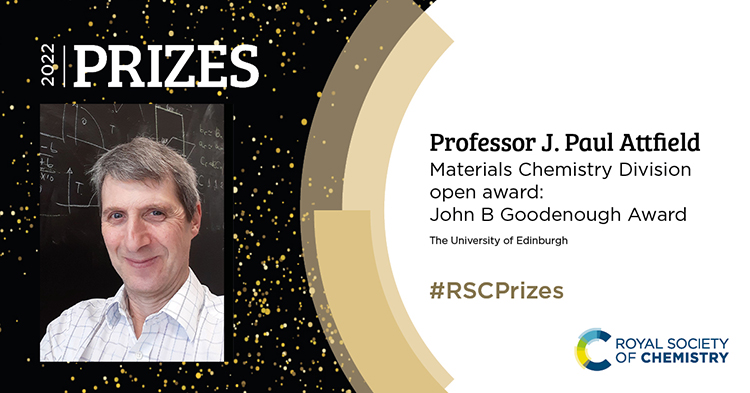 Professor Paul Attfield, who is from Edinburgh, has been named winner of the Royal Society of Chemistry’s John B Goodenough Award. Based at the University of Edinburgh, Professor Attfield won the prize for transformative discoveries of new materials from high pressure synthesis and of novel electronic phenomena in solids.

I am deeply honoured to receive this award as it reflects much hard work by members of my research group and collaborators. The connection to John Goodenough is particularly special as he is an inspirational figure in our field. I have had the good fortune to have known John since attending his lectures as an undergraduate in the 1980s.

Professor Attfield’s research is increasing our understanding of the electronic phenomena present in solids. He uses high pressures and temperatures to create new materials with interesting electronic and magnetic properties. These new materials might have potential for use in information technology hardware. 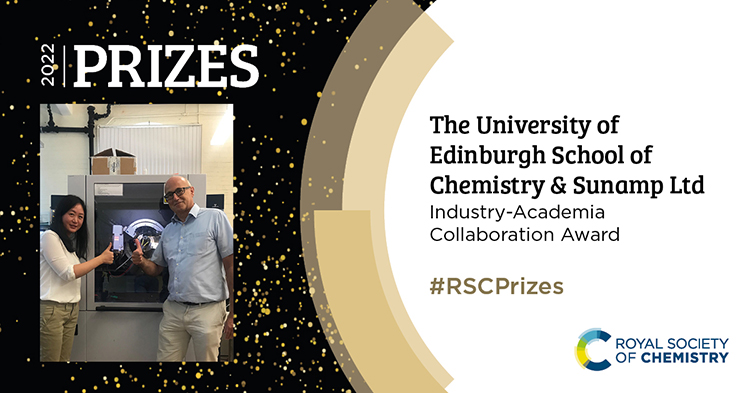 A team from Sunamp Ltd and the University of Edinburgh have been named winner of the Royal Society of Chemistry’s Industry-Academia Collaboration Award. The collaboration was awarded the prize for the creation of a successful partnership that has led to the development and commercialisation of heat-storage technology using novel formulations of phase-change materials.

Sunamp Ltd and the University of Edinburgh also receive a trophy for the team.

It is inspiring to work on a project where your work is up-scaled to a final product that you can see being used in real life. Often as a chemist it is difficult to see the bigger picture but by collaborating with an industry partner it is encouraging to see your hard work being used in such an innovative and important application.

Hannah Logan, PhD student at the University of Edinburgh

This research is the core of potentially every household's thermal requirement across the world. We are going from the lab into homes and having a measurable impact on the decarbonisation of heat while being accessible to those who need it most.

We are absolutely delighted to receive this award in recognition of the enduring and highly successful partnership between Sunamp and the School of Chemistry. It is a tribute to the outstanding staff and students across this partnership who, through their commitment and innovation, have developed world-leading technology that is tackling both climate change and fuel poverty.

This successful collaboration has enabled Sunamp Ltd to bring to market the world’s first commercially viable residential heat batteries, which efficiently store and reproducibly release heat on demand. The core component of heat-battery technology is a phase-change material (PCM) that absorbs heat on melting and releases it on freezing. Collaborative research has succeeded in overcoming two of the main problems associated with many PCMs: sub-cooling and phase separation, both of which prevent long-term, reproducible thermal cycling. This has resulted in the development of new PCM formulations that have set the international standard for cycling stability and allowed Sunamp to develop world-leading heat batteries.

Great science changes the way we think about things – either through the techniques used, the findings themselves, the products that emerge or even in how we interact with the world and those around us. Importantly, it also allows us to reflect on the incredible people involved in this work and how they have achieved their results.

Although we are in the midst of negotiating a particularly turbulent and challenging era, it is important to celebrate successes and advances in understanding as genuine opportunities to improve our lives. The work of the scientists from the University of Edinburgh is a fantastic example of why we celebrate great science, and we’re very proud to recognise their contribution today. 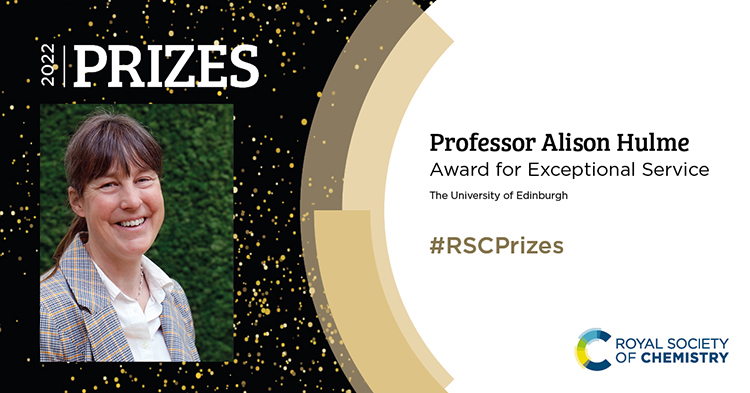 Professor Alison Hulme, who is from Edinburgh, has been named the winner of the Royal Society of Chemistry’s Award for Exceptional Service. Based at University of Edinburgh, Professor Hulme won the prize for outstanding service to the Royal Society of Chemistry and the organic chemistry community through our member communities and governance groups.

It has been very rewarding to work closely with the RSC for over 25 years and I am delighted to receive this prize. By serving on different committees, I have had the opportunity to see the strength and depth of chemistry degree programmes across the UK, organise scientific conferences with colleagues from around the world, discuss innovative science with enthusiastic undergraduate, postgraduate and ECR chemists at local and national events, and to ensure that RSC policy is relevant to chemists in the academic and industrial sectors.

The Hulme group strive to find new and more efficient ways of making complex molecules, based on templates from nature, that have the potential to treat a range of diseases. In recent years, they have also pioneered the use of new Raman imaging techniques that are particularly suited to tracking the location of drugs in live cells. In collaboration with the pharmaceutical industry and clinicians, they are applying these imaging techniques to validating new strategies for cancer treatment and diagnosis. The Hulme group’s interest in natural products has extended into their historical application as dyestuffs. The group has analysed a wide range of objects, from the tapestries at Hampton Court Palace to Subarctic Athapaskan quillwork, gaining valuable information about the production, socio-economic context and display of these objects.

Although we are in the midst of negotiating a particularly turbulent and challenging era, the work of our dedicated and passionate members has gone on. Without the efforts of volunteers, we could not achieve what we do. Our Volunteer Recognition Prizes exist to recognise these incredible people, and Professor Hulme is a glowing example of going above and beyond to inspire and support the chemical sciences community.

On behalf of the School, I am extremely proud of the outstanding achievements of Alison Hulme, Michael Cowley, Mathew Horrocks, and Paul Attfield in the latest round of RSC awards and prizes. This is a great testament to the exceptionally high quality of their work and a great reflection on the School of Chemistry.

Professor Colin Pulham, Head of the School of Chemistry

The Royal Society of Chemistry’s prizes have recognised excellence in the chemical sciences for more than 150 years. In 2019, the organisation announced the biggest overhaul of this portfolio in its history, designed to better reflect modern scientific work and culture. The winners join a prestigious list of past winners in the RSC’s prize portfolio, 60 of whom have gone on to win Nobel Prizes for their work, including 2016 Nobel laureates Jean-Pierre Sauvage, Fraser Stoddart and Ben Feringa and 2019 Nobel laureate John B Goodenough.

For more information about the RSC’s revised prizes portfolio, visit their prizes page.