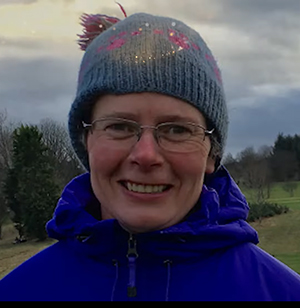 Angela Mudge is a Scottish, British and World Champion in hill and trail running. Despite coming late to mountain racing, and a physical disability in childhood, she rapidly excelled, winning multiple titles in domestic and international competition, as well as breaking countless course records.

Angela’s remarkable athletics success has come despite the challenge of being born with clubfeet and requiring corrective leg braces and plaster casts during her early years. During her teens, she raced on the track and in cross-country championships but found these insufficiently challenging. Upon moving to Scotland to obtain her Master’s Degree and subsequently PhD in Chemistry at the University, she discovered hill running where she has truly excelled.

Angela continues to be active hill runner, while working for Scottish Athletics to develop the sport at national level - her energy, experience and enthusiasm are proving an inspiration to endurance athletes of all ages.