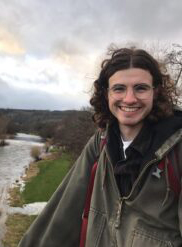 School of Chemistry PhD student Alexander Triccas has been named as one of the 9 finalists with 3 coming from the College of Science and Engineering (Freya Bull – School of Physics and Astronomy and Collette Larking from the School of Engineering).

Alexander works in the Nudelman Group where he focuses on why and how crystallization occurs. In biological organisms, crystallization can be controlled to produce complex and elaborate structures called biominerals. This topic is called biomineralization, looking at how cells produce mineralized tissues that can perform a variety of functions, from support and defence, to feeding and growth.

His research focuses on how organisms use physical, chemical and biological controls to grow crystals into structures that are vastly different from their synthetic counterparts. Of particular interest are how organic macromolecules, like polysaccharides and proteins, are used to impart these degrees of control. Alexander’s research is examining the calcium carbonate biominerals produced in the ocean by miniscule algae. These biominerals are called coccoliths, they are small elaborately-shaped scales that cover the surface of the algae cell. Their production is incredibly important to the environment, they remove carbon from the ocean and trap it in sediments. And yet, it is still unclear whether coccolith production will increase or decrease as a result of acidification in future seawater. This is because we don’t fully understand how coccoliths are formed, particular the control measures imparted in their production. He aims to answer these questions using high-resolution microscopic techniques, looking at the compositional changes to the coccolith as they grow. He hopes this will inform us of how coccolith production is controlled by organic molecules and conditions in the cell, and this will be useful to our overall understanding of how biominerals are formed.

I was really surprised to reach the final. I wanted to do it because I’m not a massive fan of public speaking, so I did this to force myself to talk in front of people. It’s also a great opportunity to introduce my work to a wider audience, which I haven’t really had the chance to do before now.

How to watch the 3MT Final

The University of Edinburgh Three Minute Thesis Competition final will take place in person on Thursday 23rd June 2022 at 2pm-4pm in the Informatics Forum.

Three Minute Thesis (3MT®) is an academic competition developed by The University of Queensland (UQ), Australia.

The 3 Minute Thesis (3MT) competition requires doctoral researchers to compete to deliver the best research presentation in just 3 minutes (and one slide). It is based on a concept developed by the University of Queensland which quickly spread across Australia and New Zealand, and has gone global.

The University of Edinburgh has run a 3MT competition every year since 2013.