Prof. Colin Pulham holds a personal chair in High-Pressure Chemistry at the University of Edinburgh and Head of the School of Chemistry. He is a member of the Centre for Science at Extreme Conditions (CSEC) at Edinburgh. 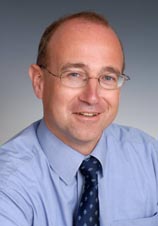 Professor of High-Pressure Chemistry and Head of School of Chemistry

Prof. Colin Pulham holds a personal chair in High-Pressure Chemistry at the University of Edinburgh and is a member of the Centre for Science at Extreme Conditions (CSEC) at Edinburgh.  He is also a member of the national EPSRC Centre for Continuous Manufacturing and Crystallisation.

His research interests include the study of crystallisation processes under a wide range of conditions, with particular interests in the effects of high pressure on molecular compounds such as pharmaceuticals, energetic materials (explosives, propellants), and fuels. He is also studying the use of phase-change materials for domestic and industrial heat storage. He works closely with colleagues at the ISIS Neutron Facility and at the Diamond Light Source, both situated at the Harwell Research Complex in Oxfordshire.

In the period 2005-2008 he was heavily involved with the Science in Society Programme organised by the European Commission and served on the jury of the European Union Competition for Young Scientists. With funding from a range of sources including EPSRC and the Wellcome Trust, he has led a team at Edinburgh who have developed and delivered a sustained programme of demonstration lectures and hands-on workshops that encourage public engagement with science and highlight the scientific research being conducted at Edinburgh. From 2009-2011 he held an STFC Science in Society Fellowship and led a project called "The Big Squeeze" that highlights the research conducted at CSEC and at ISIS and Diamond.