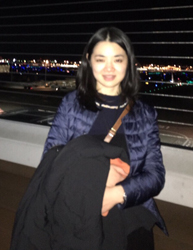 My group is developing molecule-based materials and nanomaterials that show interesting properties in response to light, pressure, magnetic field, etc. The prepared materials are tested in applications such as solar cells, transistors, supercapacitors and photocatalysts. I feel fortunate to be involved in such a diverse working environment and to have the opportunity to hear about exciting technologies that I am not currently working on.

Photovoltaics have gained popularity over the last several years, due to the increasing global demand of renewable energy sources to deal with environmental issues and growing population. In my project, I am looking at materials that would act as an efficient and stable electron-donating component (or a hole transport material, HTM) in solid-state dye-sensitised solar cells (DSSCs) and perovskite solar cells (PSCs). The two types of solar cells have close roots, but have branched into two separate fields, owing to the distinct features their light absorbers can bring. (In short, a DSSC employs a metal-centred or organic dye to capture light, while the PSC incorporates a lead-halide inorganic-organic hybrid perovskite instead.) In the device, the HTM sits on top of the light absorber, where it reduces the oxidised dye or perovskite and ensures a good overall photocurrent flow. Other important roles of the HTM include defining the maximum voltage of the device and protecting the light absorber from external moisture.

It has long been a hurdle to simultaneously achieve excellent power output and device stability in these solar cells, but the technology itself is intriguing, as they would allow us to have solar cells as part of a room interior or to charge our phones. For more information on the technology, please check our Solar Spark videos on youtube (More videos to come up soon)! 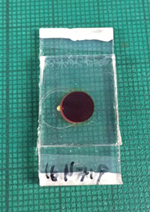 Among the various elements that are investigated in solar cell research, if I were to pick up one key element, then that should be I (iodine). This is because my specific focus is on the HTM. An electrolyte containing the I-/I3- redox couple has long been the standard dye-regeneration medium in DSSCs, as it posseses fairly good properties for this role. However, such solar cells have been suffering from long-term operation due to the leak or evaporation of the electrolyte solvent. This problem has led the field to move towards devices that employ a solid-state material (e.g. p-type semiconductor) as the dye regeneration medium in place of a liquid electrolyte. These solid materials transport the electrons via a “hole hopping” mechanism instead of ionic conduction as in the case of I-/I3-, and this is where the name HTM comes from. The original PSCs also employed the I-/I3- electrolyte, but the entire community quickly switched to HTMs due to the promising results they were showing at early-stage. That being said, I still consider the I-/I3- electrolyte as an important system, simply because it forms the origin of the vast DSSC/PSC research that exists today. I believe that the newest ideas can sometimes arise from good understanding of the original work.

My average day starts in my office, checking my to-do-list of the day and sending out any emails I have drafted the night before. Then for the rest of the day, I would either be in the main lab doing some synthesis, or running across different rooms to make devices. From time to time, I am away to attend a lecture or to have a meeting with my supervisor, research group, or public engagement team. I prefer to bring my own packed lunch but sometimes have those delicious wraps from the university shop, and cannot resist biscuits whenever they are lying around in the office.

I would say C (carbon). I think it is such a fascinating element. First of all, it is the king element in organic chemistry. The atomic mass of all elements is based on carbon-12. We do not want to increase our carbon footprint, but carbon itself is not a bad element as long as we make the effort to maintain a closed carbon cycle. Carbon Age is probably approaching…diamond, graphite, graphene, fullerene, carbon nanotubes – these all have distinct properties and they are all carbon! If that is not exciting, then what is?

The reaction of sodium (or other alkali metal) in water, known as a classic piece of “dangerous” classroom reactions. Drop a small lump of sodium in water, then the sodium will start whizzing around the water surface and quickly catch flames. Essentially, the sodium is oxidised by water into sodium hydroxide and produces hydrogen gas. The reaction being highly exothermic, the hydrogen gas gets ignited at some stage and creates the characteristic bursting flames.

Although we want to avoid such phenomena in everyday experiments, I find this reaction simply beautiful. Some scientists have even claimed that the reaction isn’t actually that simple. They have shown that the charged Na+ and OH- ions create “spikes” that are essential for the bursting flames to occur, by using a camera technique and molecular dynamics simulation.