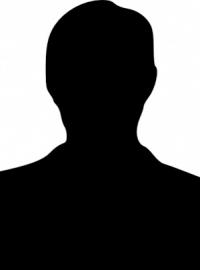 The core research theme of our group is the application of modern techniques in mass spectrometry (MS) for the functional and structural characterisation of biological systems. The School of Chemistry houses an excellent array of MS instrumentation - including FT-ICR, an ion mobility equipped Q-Tof, an extended mass range ESI Q-tof, and a MALDI ToF-ToF.

A Mass Spectrometry Platform for the Analysis of Protein Redox Modifications.

There is an emerging realisation that these reversible redox modifications (RMs) are used in many proteins as molecular switches to regulate their function or activity (e.g. tyrosine phosphatases, Redox Factor-1, and the NRF2/KEAP1 system). Therefore, investigating the molecular details and the structural/functional consequences of RMs in susceptible proteins is crucial in understanding their biochemical regulation.

Similarly, influencing a protein???s function by targeted chemical modification of specific Cys residues has been proposed as a potential strategy to manipulation cellular pathways in disease treatment. We are developing new methodologies and apply a platform of modern MS-based techniques to (i) comprehensively describe the chemistry of specific Cys RMs; (ii) accurately quantify their redox-midpoint potentials; (iii) determine the structural consequences resulting from specific RMs; and ultimately, (iv) link our structural findings to protein function. 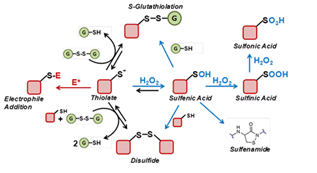 We are also interested in using these MS-based techniques in order to elucidate enzyme mechanisms. We have performed studies on a series of cysteine dependant peroxidases, known as bacterioferratin co- migratory proteins (BCPs), enzymes which play a crucial role in protecting bacteria from the reactive oxygen species. Covalently-bound protein intermediates within the enzyme pathway have been directly detected, or chemically trapped and detected, by FT-ICR MS; allowing us to "map" the reaction pathways of several BCPs.

In a related project we are developing methodologies for integrating quench-flow techniques with FT-ICR MS. We have applied this to directly study the appearance of covalently bound enzyme intermediates by high resolution MS in a time resolved manner.

This instrumentation allows us to measure pre-steady-state kinetics at low millisecond temporal resolution without the use of spectrophotometric active substrates. Furthermore fragmentation of captured intermediates using top-down methodologies has been performed to determinate the active site within the enzymes studied.

We also have a long standing collaboration with the Campopiano Research Group in studying the mechanistic details of pyridoxal 5'-phosphate (PLP) dependent enzymes.

Characterisation on Protein-Ligand and Protein-Protein Interactions.

We are currently using a mass spectrometry based approach to analyse non-covalent protein-ligand and protein-protein complexes. This work is focused on using FT-ICR MS and top-down fragmentation in order to locate binding site and binding interfaces within protein complexes.