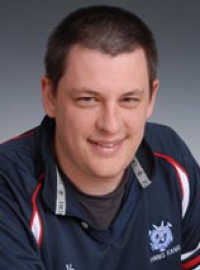 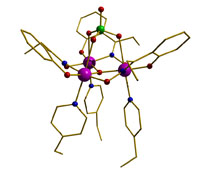 We are a synthetic inorganic group with interests in the areas of coordination chemistry and the magnetic applications of polymetallic complexes.

Underpinning all our research is an understanding of the fundamental relationship between structure and magnetic properties. We examine magneto-structural correlations on a plethora of d- and f-block complexes ranging from dimers and trimers through to molecules containing tens if not hundreds of metal centres, to gain insight into the nature of magnetic exchange and how it is controlled by changes in structure.

In collaboration with Stephen Moggach and Simon Parsons we routinely employ hydrostatic pressure as a means of characterising structure-property relationships in coordination compounds. These can be molecular or non-molecular systems, in pursuit of uncovering a host of novel high pressure phenomena including bond breaking and formation, dynamic Jahn-Teller distortions, magneto-structural correlations, switching of magnetic exchange interactions, and changes in magnetic ordering temperatures. 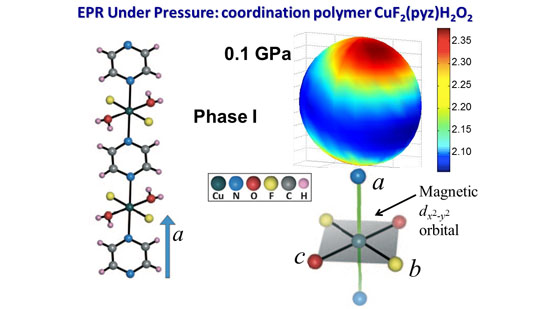 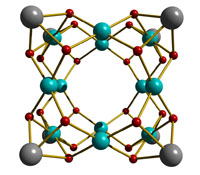 Magnetic refrigeration constitutes one of the most promising applications envisioned for molecule-based materials, specifically those of high spin, isotropic, metal centres. The refrigeration process is based on the magnetocaloric effect (MCE). The MCE is of great technological importance since it can be used for cooling applications according to a process known as adiabatic demagnetization. This technique is particularly promising for refrigeration at very low temperature, beyond the reach of liquid helium-4, providing, for example, a valid alternative to the use of helium-3 which is quickly becoming rare and extremely expensive.

In collaboration with Dr Scott Dalgarno at Heriot-Watt University, we are investigating the use of calix[n]arene scaffolds to build paramagnetic cage complexes. By developing a library of cages (more than 100 to date) derived from calix[n]arenes (n = 4-8), homooxacalixarenes and bis-calixarenes we aim to map out assembly modes and coordination constraints of these ligands with Transition and Lanthanide Metal ions under a range of reaction conditions in order to bridge a gap between supramolecular chemistry and molecule-based magnetism. 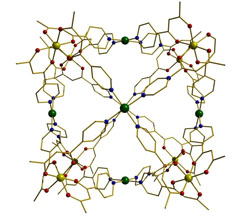 The vision is to construct magnetic coordination capsules with internal cavities capable of hosting magnetic and redox-active guests for the construction of multifunctional molecular magnets. To control and manipulate (switch on; switch off) magnetic exchange between metal ions in the host framework and between the host and guest(s) through both internal and external perturbations via the use of redox-active (radical) ligands in the framework of the host, redox-active/paramagnetic guests held within the cavities, and through the use of applied external hydrostatic pressure. To build said capsules in a manner amenable to exohedral functionalization such that the organic sheaths surrounding the capsules are easily derivatised post-synthetically to modify and tune solubility, reactivity, magnetic behaviour, stability and substrate specificity. 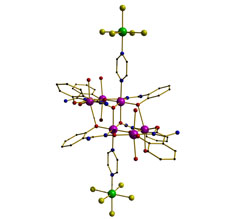 Our approach involves the synthesis of a library of mononuclear complexes based on highly anisotropic 4d and 5d ions which can act as ligands towards other metal ions or complexes. We are particularly interested in the chemistry of Re(IV) because of the large number of stable, paramagnetic complexes known with this ion. The "complex as ligand" or "metalloligand" approach offers a predictable route to the construction of pre-designed metal cages with predictable structures and tuneable magnetic behaviour.