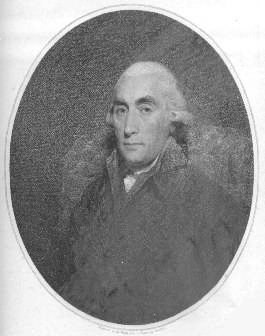 Joseph Black was born on 16 April 1728 in Bordeaux where his father, a Belfast man of Scots descent, was in the wine trade. He was educated by his Scottish mother, who taught him English, until the age of twelve when he attended school in Belfast. In 1744 he entered the University of Glasgow where after attending the general curriculum for three years he decided to study medicine and hence attended the chemistry lectures of William Cullen. Chemistry captivated him, his interest being warmly encouraged by Cullen, and for three years he served as Cullen's assistant. In 1752 he went to the University of Edinburgh to complete his medical studies and graduated M.D. in 1754. In 1755 he read to the Philosophical Society of Edinburgh a classic paper, published in 1756, describing chemical experiments many of which had been incorporated in his graduation thesis. This paper, which shows Black as an outstanding scientist, demonstrated quantitatively that a gas which he called "fixed air" (carbon dioxide) was a constituent of alkaline solids such as basic magnesium carbonate; as important as his results was Black's pioneering quantitative approach to chemical experimentation. The work was a foundation stone of the impending revolution in chemistry as acknowledged by the great chemist Lavoisier who in 1789 wrote to Black as "One of the most zealous admirers of the depth of your genius and of the important revolutions which your discoveries have caused in the Sciences".

In 1755 Cullen was appointed Professor of Chemistry in Edinburgh, and in 1756 Black succeeded him in Glasgow where he added to his teaching duties a large medical practice. While at Glasgow Black developed his second important research on latent heat and specific heats; he first described his investigations in 1762 to a philosophical and literary society in Glasgow but he never published this work.

In 1766 Black succeeded Cullen as Professor of Chemistry at Edinburgh; he wrote from Glasgow to his father -

"I have had the good fortune to teach Chemistry here with applause and last winter was honoured with the regular attendance of four Professors at my lectures. Dr Robertson [Principal of the University of Edinburgh] who misses no opportunity of improving the Medical College at Edinburgh has for several years past been striving to bring me into it and in some hard struggles which he and Dr Cullen had to keep out other Candidates he often did me the honour to declare that he did not act from friendship or attachment to any person but solely to promote the Prosperity of the College".

After taking up the Edinburgh chair, at the age of thirty-eight, Black did no further significant research but through his teaching contributed very importantly to the development of chemistry. 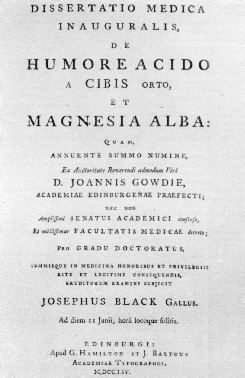 Black was an excellent lecturer and being an expert manipulator he illustrated his lectures by numerous experiments which were simple, neat and elegant. During his lifetime many manuscript versions of his lectures, several of which survive, were made by students and by professional copyists. In the 1790s the average number of students attending Black's lectures was over 200 and during his tenure of the Chair he must have taught chemistry to about 5,000 students and thus was uniquely influential, in Britain, in the dissemination of chemical knowledge during the latter half of the eighteenth century. Former students of his held Chairs of chemistry in Edinburgh, Glasgow, Cambridge, Oxford, and not a few made significant contributions to chemistry, pure and applied. Black was one of the luminaries of the Scottish Enlightenment the spirit of which is nicely illustrated in that Adam Smith, the political economist, loved nothing so much as to get Black, the chemist, and Hutton, the geologist, together at an Oyster Club and listen to their talk.

Black like most of the medical and scientific professors received no salary but the class-fee system whereby each student paid three guineas directly to the Professor for a course amply compensated those teachers with large classes. An interesting sidelight is recorded by Henry Brougham, who later became Lord Chancellor, when he attended with great interest Black's course in 1794-5; on Black's table there was a small brass instrument for weighing guineas which Black told Brougham had become "necessary from the quantity of light gold which he used at first to receive unsuspected from one class, particularly, of his pupils".

In 1795 Black, in declining health, negotiated the appointment of a former student, Thomas Charles Hope, as conjoint Professor of Chemistry; in the session 1795-6 Hope delivered only a few lectures. The session 1796-7 was the last in which Black lectured and in the University of Edinburgh Library there is a manuscript copy of notes from these lectures; Black and Hope alternated each doing six blocks although these were not of uniform length; chemically the volume is of great interest as the last public exposition by Black on the subject to which he had contributed so much.

Black died on 6 December 1799 aged seventy-one. He left the substantial sum of £20,000 and his quantitative exactitude was expressed in his will for he divided the bequest into 10,000 shares so that he could allot to each of the legatees the exact amount he considered appropriate.

All contemporary comment agrees that Black was a man of distinctive personality, sociable and with an attractive and sympathetic temperament. The most fitting concluding tribute is from the Senatus Minutes of the University of Edinburgh of 13 December 1799 -

"In consequence of their former appointment, they [the Principal and Professors] went in procession in their Gowns, preceded by the Mace, and followed by a numerous body of students (who had assembled in the great room of the Library) to the house of the late Dr Black in Nicholson's Street, and from thence accompanied the funeral, by Chapel Street to the Greyfriars Church-yard. After the internment they returned to the College, through Brown's Square and Argyll's Square".