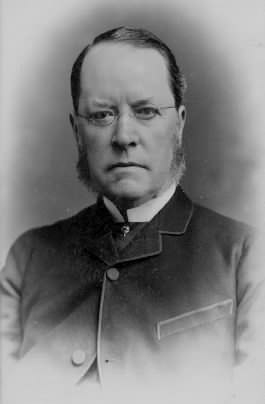 Lyon Playfair was born on 21 May 1818 at Meerut in Bengal where his father was Chief Inspector-General of Hospitals. After school in St. Andrews he attended Arts courses in St. Andrews University from 1832-34. In Playfair's chemical education the chief influence was Thomas Graham under whom he studied at the Andersonian College in Glasgow (1835-37) and whose private assistant he became at University College, London, in 1838. In the following year, on Graham's advice, Playfair went to study under Liebig at Giessen where he graduated Ph.D. in 1841.  On returning to Britain he was successively manager of the chemical department of a print works, Professor of Chemistry in the Royal Institution Manchester, and from 1845 chemist to the Geological Survey and Professor of Chemistry in the Government School of Mines. In 1843 he was appointed a member of a Royal Commission for the examination of the sanitary conditions in large towns. This was his initiation in public affairs that henceforth were to be a large part of his life's work. From that time until his death there was no year in which he did not serve, very often as Chairman, on a Royal Commission or a Select Committee of the House of Commons. One of his early major tasks was as Special Commissioner to the first International Exhibition, that of 1851. Although there was no precedent to guide him, the success of the 1851 Exhibition was largely due to Playfair's vision, untiring energy, and ability to obtain the co-operation of others. The value of his work was recognised in the highest quarters and, among other honours, Playfair became an officer in the household of the Prince Consort. One result of the 1851 Exhibition was the foundation in 1853 of the Science and Art Department and Playfair was appointed head of the science side and subsequently Secretary of the whole Department. By 1858, he had accomplished much in public affairs and it seemed to his friends that he would remain in London as an eminent public servant. However he applied for, and was appointed to, the Edinburgh Chair of Chemistry; in his autobiography he says - "Once more I succeeded in breaking away from public life to enjoy the quiet of an academic office. The Chair of Chemistry in the University of Edinburgh has always been the chief ambition of scientific chemists". In 1868, he was elected as the first representative in Parliament of the Universities of St. Andrews and Edinburgh and he resigned his chair in 1869.  The remainder of his life was spent in politics; he died on 29 May 1898 in London.

Of Playfair's contributions to pure chemistry the most important was the discovery and investigation of the nitroprussides, and to applied chemistry, the work undertaken by him and Bunsen on the gases evolved in iron furnaces. The greatest part of his time however was devoted to the application of scientific principles to agriculture and to industry through his work on committees and Royal Commissions.

In his inaugural lecture at Edinburgh Playfair saw his role as missionary to bring chemistry into relation with the industries of the country that had for too long been carried on by rule of thumb. During his tenure of the Chair he made a number of important changes in the teaching of chemistry. Firstly Gregory had not been able to found a teaching laboratory consistent with the importance of the chair. This Playfair determined to do and he created, practically out of nothing, a useful teaching laboratory. The rooms then available were very unsuitable, but he made them usable; the funds to equip and run the laboratory were quite inadequate but, for this purpose, Playfair spent the whole of his professorial income during his first year and a large part of his income for several subsequent years. Secondly, finding the classes too big for effective teaching by lectures alone, he introduced the tutorial system. The tutors followed his course of lectures and drilled the students in exercises upon the subjects that had been discussed. Thirdly he introduced the system of Merit Certificates. He did this because the examination system was such that only two or three of the students could carry away the prizes and he believed that many of the others became discouraged. Thus as he says "I made each separate examination of the value of 100, and enrolled all students who obtained 75% or upwards in the first list of honours, and gave to each a bronze medal, while those who obtained between 50 and 75% received certificates in a second class of honours. This gave great life to the class, and sustained a general competition all through the session". The systems of tutorial classes and of Merit Certificates were rapidly adopted by the other Scottish Universities. 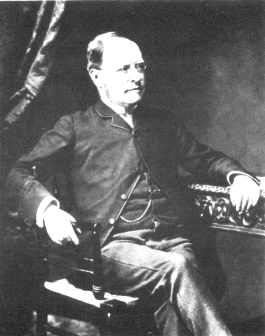 Playfair's greatest service to the University was in the institution of Degrees in Science. At this time there were Edinburgh Degrees in Arts, Divinity, Law and Medicine; Chemistry and some other sciences, e.g. Botany, were in the Faculty of Medicine and classes in these subjects were only for Medical students. In February 1863 Playfair proposed in the Senate, the body regulating the academic affairs of the University, "That a Committee be appointed to consider the best means by which a Degree in Science may be initiated in this University". The Senate agreed and a Committee of ten was appointed with Playfair as Convener. The Committee's proposals were reported to the Senate in December and in February 1864 were generally accepted, John Goodsir, Professor of Anatomy, alone dissenting. In a lengthy speech Goodsir concluded 'Degrees of this kind, in spite of every precaution, would tend to diminish the value put upon a general mental culture, would indicate mere scientific attainment, and not necessarily indicate scientific ability. Finally - I dissent from the proposal because I see in it the commencement of a process which will convert this University into a mere Degree-giving institution' Goodsir's objections were answered by Playfair's Committee to the satisfaction of the Senate and the new Degrees of Bachelor of Science and Doctor of Science were first offered in the academic year 1864-65.

The Degrees were first offered in five areas, Mental Science, Philology, Natural Science, Mathematical Science and, the only one considered here, Physical Science.  For admission to the Degree Course it was necessary for candidates to give proof of having received a liberal education; most commonly this meant either already having an Arts Degree or passing a preliminary examination in specified subjects. In Physical Science, the Degree of Bachelor of Science was a two-year course, and a student could proceed to a third year for the Degree of Doctor of Science. In the First Year there were five subjects - Mathematics, Physics, Chemistry, Botany and, a single subject, Zoology plus Geology. In Second Year the candidate took two subjects - Physics and Chemistry. Those proceeding to the Doctor of Science Examination studied, in a third year, only one Science and, in addition, specialised in a particular branch thereof. In today's terms, the Bachelor of Science is analogous to the present Ordinary Degree and the Doctor of Science is equivalent to the Honours B.Sc. in a single subject. Matters relating to the Science Degrees were handled by a Science Committee; a Faculty of Science was not established until 1893. Of the work of the Science Committee only one aspect need be mentioned, namely that in 1873 it was agreed that candidates for the Doctor of Science Degree must submit a thesis containing some original research and that the thesis must be approved before the candidate was allowed to enter for the D.Sc. Examination.

At this time instruction in Chemistry was designed primarily for the approximately 200 medical students taking the subject. There was one lecture course of about 100 lectures, the practical course consisted of about 60 1-hour sessions and there was the tutorial work introduced by Playfair. More advanced instruction in chemistry would be by tutoring and private reading and after the First Year much time was spent in practical work, at this time entirely analytical, the Chemistry Laboratory being open all day five days a week, throughout the session. The Professor had three Assistants, new University posts established by the 1858 Universities (Scotland) Act as distinct from assistants privately employed by Professors. One Assistant helped in preparing and performing lecture demonstrations, one ran the practical class and the third ran the advanced laboratory and tutored. Most of the Assistants in this period subsequently made their mark. The most distinguished was James Dewar, invited to the Chair of Natural Philosophy at Cambridge and well-known for his low-temperature work including the liquefaction and solidification of hydrogen.

The number of students taking Degrees in Physical Science was at first very small. In the ten years after the institution of the Degree there were four Doctors of Science. The first, James Affleck (1867) became an Inspector, under the Alkali Act, of chemical factories; James Black (1869) became Professor of Chemistry in the University of Otago, New Zealand; Andrew Aitken (1873) lectured on Agricultural Chemistry in the University of Edinburgh and was also Professor of Chemistry in the Veterinary College; Robert Romanis (1876) was a chemist in the Government Service in Burma.