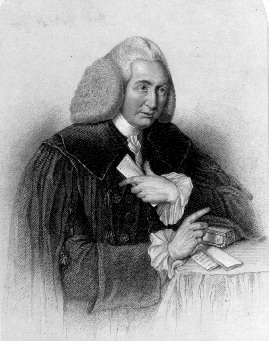 William Cullen was born in Hamilton in Lanarkshire on 15 April 1710. From Hamilton Grammar School he went to the University of Glasgow where he attended some Arts classes. His early medical training and experience comprised apprenticeship in Glasgow, service as a ship's surgeon, a period as assistant to an apothecary in London, and from 1732 to 1734 medical practice near Shotts in Lanarkshire.  According to his biographer1 he 'passed the winter sessions of 1734-35 and 1735-36 at Edinburgh, in attendance on the medical classes, and in the prosecution of his general studies' and during this period is said2 to have attended Plummer's chemistry lectures. From 1736 to 1744 he practiced in Hamilton graduating M.D., Glasgow, in 1740. In 1741 he married Anna Johnstone, the daughter of a minister, and they had a large family of seven sons and four daughters. In 1744 Cullen moved to Glasgow continuing in private practice and lecturing semi-officially on medicine for the University of Glasgow. In 1747 he was appointed to the newly established Lectureship in Chemistry in Glasgow and in 1751 to the Chair of Medicine; from 1747 until 1755 he lectured on chemistry and medicine and continued with a rapidly increasing practice. In 1755 he was appointed conjoint Professor with Plummer in Edinburgh with the succession on Plummer's death which occurred in 1756 and Cullen held the Chair until 1766. Subsequently he was, in Edinburgh, successively Professor of the Institutes of Medicine (Physiology) and of the Practice of Medicine until his resignation in 1789. His contributions to medicine and his widely used textbooks earned him an international reputation.  He was elected a Fellow of the Royal Society of London in 1777. He died on 5 February 1790 at his country house at Kirknewton in Midlothian.

Cullen wrote very little on chemistry and made no discovery. His single published paper relating to chemistry was "Of the Cold produced by Evaporating Fluids, and of some other Means of producing Cold". Cullen took an active interest in the currently important manufactures involving chemical operations, bleaching and the production of salt, but, in the words of Alexander Fleck, a former director of I.C.I., "his contributions do not seem to have been effective in causing improvements in practice".3 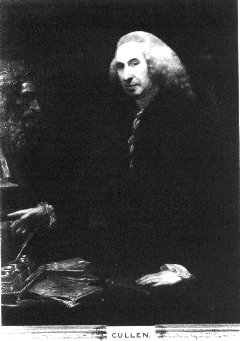 Cullen's reputation as a chemist is based on his teaching in which he employed a variety of skills, none of which were innovations, but which had never previously been brought together by one man. It has been said that Cullen was the first in Britain to assign to chemistry its proper position as an independent science of the greatest importance and capable of the widest interpretation and not, as it had hitherto been conceived, a mere appendage to medicine. This claim cannot be substantiated because James Crawford in his first lecture stated that he will 'shew by what methods and upon what principles, I Judge a System of Chymie is to be raised, that it may deserve a place among the Sciences'. The manuscript notes of lectures of other University teachers of chemistry of the period, Mickleburgh and Hadley at Cambridge and Alcock and Smith at Oxford, have been examined and "these make it quite clear that Cullen's trenchant critical outlook, and hopes for drawing generalizations from a mass of miscellaneous information, were not novel".4 Cullen went further in two respects, sharper criticism and particularly the much greater thought devoted to the arrangement of his material.

A number of manuscript volumes of students' notes of Cullen's lectures are extant in Scottish libraries and have been described, their contents outlined, and a chronology established;2 the contents of two courses have been examined in detail: that given at Glasgow in 1748-9 and that at Edinburgh in 1757-85

The Edinburgh lectures were divided into (i) general doctrines, on the laws of combination and separation, and the sources and modes of communication of heat and its effects on bodies, and (ii) particular doctrines, dealing with the five classes of bodies: salts, inflammables, waters, earths, and metals, with the properties of animal and vegetable substances, and concluding with the applications of chemistry in some of the practical arts such as agriculture, brewing, bleaching, and the manufacture of alkalis.1 The lecture notes mentioned above reveal a number of interesting aspects of Cullen's teaching.

"It will only be when the languor and debility of age shall restrain me that I shall cease to make some corrections of my plan or some additions to my course", wrote Cullen. The lecture notes referring to several separate years show that he was faithful to his ideal and through constant revision kept his course, "lively, critical, up to date, and adapted to the needs of his audiences".5 A good example is afforded by a manuscript of Cullen's lectures in the library of Clifton College which dates from a course given in the mid-1760s and which contains a section on a new class of bodies -'aerial bodies'; the inclusion of this new class is justified as follows - "In this course I have added aerial bodies both on account of this vanity [variety?] in them and also because we are now sure that they enter into the composition of even solid bodies" 5

In one respect, the introduction of voluntary practical work, Cullen was almost certainly a pioneer. He concludes one course given in Glasgow with the words -

"The laboratory has been open to you, but I am sorry to find that so few of you have frequented it Any of you that have a desire to go further in the practice may have all the assistances the Laboratory affords, and you will perhaps find me at more leisure to assist you than hitherto I could. I have no more to add than to thank you".5

In his lectures Cullen illustrated many of his points by simple demonstrations as did others of the period, for example Crawford used 142 demonstrations in his course and Hadley over 500.4 The Clifton manuscript, which is incomplete, covers 36 lectures and it seems probable that a full course comprised about 60 lectures.

Cullen was a man of great personal charm, a lively personality, very articulate, and with a rich imagination. All of which contributed to enthusiastic and fluent presentation of his very lucid lectures. His success as a teacher is shown by the increasing number of his students. In his first year at Edinburgh his course was attended by 17 students in his second year by 59 and so on increasingly until he had a class of 145, several of whom had attended more than once. During his eleven years as Professor of Chemistry, Cullen had forty American students many of whom sent their own promising students to Edinburgh in later years. Cullen gave them all a cordial welcome and became the idol of his American students.6