The School of Chemistry Collection

The School museum has an extensive collection of exhibits. Some are on display in the department while others are on loan to various collections.

You can find out more details about our items currently on loan and our public engagement activities by visiting our collection's Outreach and Public Engagement page.

The museum holds a model that is made from small balls of wool (red and blue), held together by steel needles. The model itself is about 20 inches along each side, corresponding to a 3 x 3 x 3 cubic lattice.

The question of the authenticity of the model is nicely summed up by a testimonial written by James Kendall (who took over the Chair of Chemistry in 1928). The testimonial reads as follows: 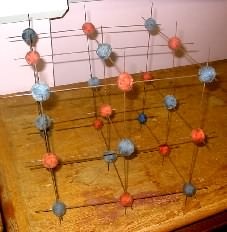 "When I took over the Chair of Chemistry at the University of Edinburgh from Sir James Walker in 1928, he showed me the model to which Dame Kathleen Lonsdale refers in the Departmental Museum, and told me that it was Crum Brown's construction of the crystal lattice structure of sodium chloride, dating from 1883.

The model itself is not labelled NaCl, but Walker was a student at Edinburgh under Professor Crum Brown in 1883, and I am confident that his assertion is correct. I might add that when I delivered the Christmas Lectures at the Royal Institution in 1938, this model was among my exhibits (see Young Chemists and Great Discoveries, Bell Sons, 1939, p.176 - a copy is in the R.I. Library). Sir William Bragg informed me that there was much hilarity among his technical assistants when it was unpacked (they cannot be blamed, indeed, for thinking that I was bringing coals to Newcastle). However, he was most interested in my story of its origin, and I well recall his philosophical remark that of course other people had speculated on the lattice structure of sodium chloride long before 1913, but speculation was never equivalent to proof.
[Note added: 'Written by J.K. in response to my request for evidence of authenticity of Crum Brown's model'] [Arnold Beevers' handwriting?]"

A Testimonial for James Kendall

This is a small written note in the hand of Svante Arrhenius, who won the Nobel Prize for Chemistry in 1903. Kendall went to work with him in Stockholm after graduating from Edinburgh in 1910. He succeeded Walker for the Chair in Chemistry at Edinburgh in 1928. Read more about Kendall at the Recent History page.

"On the request of Mr. James Kendall, M.A. and B.Sc. of Edinburgh it is a very great pleasure to me to testify that he has worked in the Nobel Institute for physical chemistry of the Academy of Sciences here during the past twelve months with the best success and to my perfect satisfaction. Through his work he has elucidated some very important questions in physical chemistry and has shown himself as a very clear-sighted investigator on the problems taken up by him.
Stockholm and Experimental?allet July 1st 1913
Svante Arrhenius
Director of the Nobel Institute of physical Chemistry of the R. Academy of Sciences."

Indeed, Crum Brown's thesis presented to the Faculty of Medecine at Edinburgh in 1861 had been on "..The Theory of Chemical Combination..".

Gallery of Items From Our Collection Other Items of Note:

We are happy to respond to specific enquiries and to receive visitors. Some interesting enquiries dealt with by the Curator in recent years have been from:

Dr Andrew Alexander is curator of the collection. If you have a request to see items from the collection, please contact the School Admin team on 0131 650 7546 or email our Admin team

As part of the School of Chemistry Museum Development Plan, we are working towards allowing greater public access. While currently unable to offer regular open hours, we enthusiastically participate in a wide range of outreach activities.