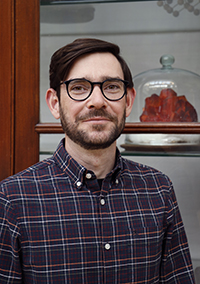 Dr Stephen Thomas has been announced as a finalist in the UK Blavatnik Awards 2022. This follows on from being awarded the Royal Society of Chemistry Merck, Sharp and Dohme Award in 2021.

The Blavatnik Awards for Young Scientists in the United Kingdom is a highly prestigious national prize celebrating the accomplishments and future potential of the UK’s most innovative young academic staff, scientists and engineers working across Life Sciences, Physical Sciences & Engineering, and Chemistry.

Dr Thomas and his group have been recognised for their research on the use of Earth-abundant metals such as iron and aluminum in the development of new catalysts — species that increase the rate and efficiency of chemical reactions. This approach is less energy intensive, produces less waste, is more cost-effective and offers a sustainable alternative to the more commonly-used precious metal catalysts, which are significantly more scarce and toxic.

The Blavatnik Awards for Young Scientists in the UK are generously supported by the Blavatnik Family Foundation and independently administered by the New York Academy of Sciences.

The Blavatnik Family Foundation awards these annually in the US, UK and Israel. In the UK (United Kingdom Awards | Blavatnik Awards for Young Scientists) there are 3 categories, Chemistry, Physical Sciences and Engineering, and Life Sciences. Dr Thomas has been named a 2022 Chemistry Finalist. This is the first time an Edinburgh chemist has been an honouree.

The School of Chemistry is extremely proud of Dr Stephen Thomas’ most recent accolade. Being named a Finalist for the prestigious international Blavatnik awards 2022 is a fantastic accomplishment, and is especially significant as this is the first time that a colleague from the School of Chemistry has been awarded this honour. We are excited to continue supporting Stephen’s academic journey and look forward to see how this award will help him take his research to an even higher level in the future.’

This is an honour for the group and myself, and a testament to the hard work and ambition of the PhD students and postdocs I work with. We focus on the developing, enabling access to, and understanding sustainable methods for chemical synthesis and manufacture

The Blavatnik Awards for Young Scientists in the United Kingdom will be conferred at a formal ceremony in London in the spring and at the New York Academy of Sciences in July.

Most industrial-scale chemicals manufactured worldwide require at least one catalytic reaction step during production. Catalytic steps save time and energy in the preparation of pharmaceuticals, petrochemicals, fertilizers, and other consumer goods by increasing the rate of the reaction and often lowering the amount of energy required for a transformation to occur. Unfortunately, many catalytic reactions rely on precious metal elements such as platinum, palladium, and rhodium, which are less abundant in nature than other metals, expensive and can produce toxic by-products that can harm the environment. Dr Thomas has developed a research program focused on the development of sustainable, Earth-abundant metal catalysts that can perform the same chemical transformations as their precious metal counterparts.

Chemical transformations that utilize metal catalysis have two major hurdles— reactivity and ease of application—that must be overcome in order for the reaction to be viable on a practical scale. One of the reasons that iron and other Earth-abundant metals are not more common is that the most reactive versions of these catalysts are often air- and water-sensitive, making them difficult to handle. Thomas and his group have developed solutions to this problem by discovering reaction conditions in which the metal is activated in situ—within the reaction mixture. These in situ activation methods mean that the high reactivity needed for efficient catalysis can be achieved without needing to overcome the practical limits of handling air- and moisture-sensitive species.