The same proteins thought to contribute to motor neuron disease can be found in the gut many years before any brain symptoms occur, a new study by the University of Aberdeen and the University of Edinburgh has found.

The study, published in The Journal of Pathology: Clinical Research, found evidence of the disease in one patient 14 years before they went on to develop the condition.

The researchers suggest it could be possible to detect motor neuron disease (MND) and take action long before the brain is affected by taking a small gut biopsy or stool sample.

Although often thought of as a disease that only affects the brain, people with MND often have symptoms affecting other parts of the body, especially the gut. These symptoms can include altered bowel habits and weight loss.

MND is thought to be linked to the accumulation of certain proteins in the brain that inappropriately clump together making the cells of the brain sick, causing problems with moving, breathing and even thinking.

In an effort to understand wider manifestations of MND, the researchers studied historically banked tissue biopsies to search for signs of disease.

The study revealed disease-associated proteins present in the gut, skin, lymph nodes and other tissues often years before these patients presented with symptoms.

I believe this is a significant finding for our wider understanding of this disease. The early detection of disease could be a critical missing step in our attempts to cure this disease – if disease markers are present outside of the brain it could pave the way for non-invasive early detection.”

Dr Jenna Gregory of the University of Aberdeen, study lead.

Despite extensive clinical trials there is currently only one licenced drug which has been shown to increase the lifespan of people with MND by only a few months. One possible explanation for unsuccessful drug trials is that by the time someone has symptoms of the disease, it may be too late for successful intervention.

Potentially effective treatments have been identified from a wide-range of experimental studies, however, in these studies they were often only effective, or most effective, when applied prior to the onset of the disease – early detection in this way is huge step forwards in our search for a cure.

We hope that this will mean that there is a better chance of treatment success, and that the onset of the disease could be delayed or even prevented if caught and treated early enough.

Dr Fergal Waldron, a co-author on the study from the University of Aberdeen

MND is a devastating disease, with those being diagnosed surviving a mean of 3-5 years. This work shows that it's possible to observe hallmarks of the disease in easily accessible tissue more than a decade prior to the first symptoms. This could pave the way to earlier diagnosis, extending the therapeutic window, leading to an eventual cure to MND.

This work also highlights the fantastic tissue resources available in Scotland and exemplifies the strength of interdisciplinary research at the Chemistry-Medicine interface in Edinburgh and Aberdeen.

Judi O'Shaughnessy and Owen Kantelberg from the University of Edinburgh School of Chemistry were also authors on the paper.

The findings in our paper suggest we can detect MND in other body systems long before neurological symptoms manifest. This is exciting because it means that patients could start receiving treatments before the brain is affected, significantly improving prognosis, quality of life and potentially curing this devastating disease.

This work is a breakthrough in demonstrating that MND pathological features are widespread throughout the human body and can be found in the skin, lymph nodes and gut. These findings question our central nervous system-centric view of the disease and highlight that non-neuronal symptoms may also be highly significant to MND. Moreover, the identification of robust MND biomarkers in easily accessible samples could pave the way for reliable diagnostic tests, thereby enhancing patient stratification for clinical trials and eventually allowing patient treatment before significant neuronal damage occurs. 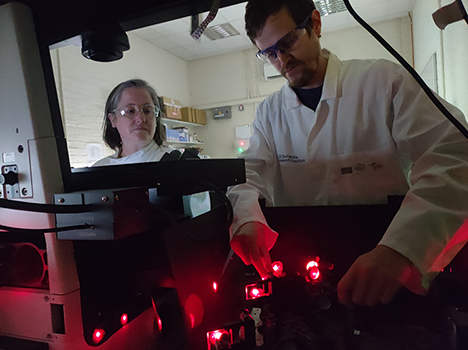