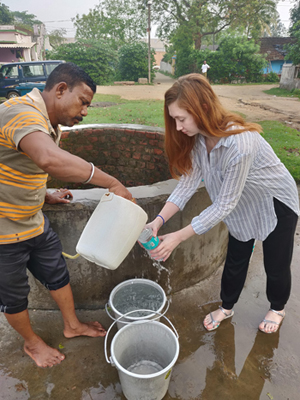 The Indian Institute of Technology Kharagpur (IIT KGP) is one of the oldest and most prestigious scientific and technological institutes in India and, with a combined student and staff population of around 30,000, it is effectively its own self-contained town. For three weeks over March and April 2019, I was fortunate enough to be able to visit the campus of IIT KGP to conduct research at the School of Chemical Engineering and the Rural Development Centre.

According to the World Health Organisation, approximately 30% of the global population are currently without a safe source of drinking water, which in turn leads to around half a million deaths a year caused by the consumption of water contaminated with pathogenic bacteria. This is a particular problem for India, where a significant portion of the population live in rural areas without access to water of a sufficient standard for human consumption.

Funded by the Hydro Nation Scholarship Programme, I am currently undertaking PhD research which aims to alleviate this problem using low-cost catalyst materials which are activated by sunlight (photocatalysis). If successful, this will provide an easy-to-use, point-of-source method of water purification for those who are most in need, with no requirement for expensive equipment or highly trained professionals.

With the attendance at the World Water Day Conference in Edinburgh the day before my flight to motivate me, the aim of the research visit was to take catalyst materials which have previously been developed and tested under idealised laboratory conditions in the Schools of Chemistry (supervised by Prof. Neil Robertson) and Engineering (supervised by Dr Efthalia Chatzisymeon) at The University of Edinburgh, and test them under the real-world conditions for which they were designed. This would allow insight into the viability of the technology to be gained and help identify further areas for development for the remainder of my PhD.

In order to test the catalysts, it was essential that water sources were collected from rural villages that are used daily for drinking purposes. Thus, the trip began with visits to rural villages surrounding the campus, to learn about the sources of water widely used. Five samples were identified as being useful for testing:

All of these samples were analysed before treatment using bacterial culture counts, UV-Vis spectroscopy, measurements of the total dissolved solids (TDS), conductivity and salt content. This provided knowledge on which sources of water were most contaminated, what with, and which may be most receptive to the treatment. 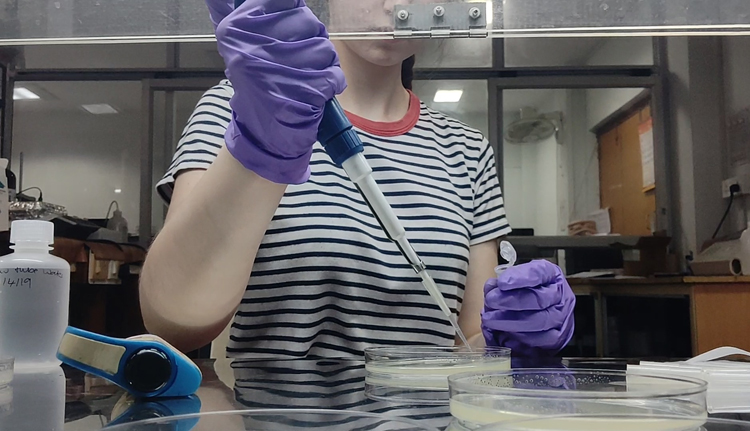 The treatment itself involved filling 3 plastic bottles with the water sample and exposing them to sunlight for 3 hours: one with no catalyst, one with commonly studied titanium dioxide, and one with bismuth titanate (BTO), which had been recently developed by former PhD student Gylen Odling. The catalysts used in this study were immobilised on glass beads, such as to eliminate the problem of removal of the catalyst post-treatment.

After treatment, the same analysis was conducted, revealing the success of each catalyst for each water sample. As expected, there was a significant drop in bacterial content from sunlight alone, though the presence of both catalysts did enhance this effect. Solid contaminants affecting the TDS, conductivity and salt quantities were not observed to decrease to any significant extent, but did help to characterise the nature of contaminants that could be present in each water source

A further study was conducted to test the effect of exposure time. This was performed by placing the bottles in sunlight for 1, 3 and 5 hours. This test gave a very promising result, with the rate of bactericidal activity being greatest for the BTO catalyst, indicating that the newly developed material does indeed operate more effectively than the plain titanium dioxide starting material from which it was synthesised. This provides excellent motivation for further materials chemistry research and confirms that the catalyst does indeed work under real-world conditions.

Although an exciting initial result, there was often still bacteria present in the water after the full 5 hours of treatment, and according to the WHO, safe drinking water should be completely free from all E.Coli. It is not clear what species of bacteria was still present after the treatment, since a selective nutrient medium was not available, though this does imply that further optimisation of the material is crucial for it to be accepted and applied in such settings for widespread use.

Further, the numerical values for bacterial content and light absorption from UV-Vis data were seen to fluctuate between repeat tests, which is likely to be a result of intermittent cloud cover. Thus, a material which can facilitate a more rapid rate of reaction would be beneficial to prevent and remaining bacteria further multiplying during times of low sunlight intensity. This will be one of the main focuses of future research following this field study.

Also of significance to this research is the cost of the treatment method used. Dr Somnath Ghosal from the Rural Development Centre at IIT KGP has led the installation of a heavily subsidised filtration and UV-treated water system for the villages of Porapara and Hurhuria, which allows each household to collect 15 L of safe drinking water a day for 1 Rupee (approximately £0.01). Unfortunately, due to the extreme poverty in these area, many inhabitants of the village still find this too expensive. Thus, it must be firmly held in mind when moving forward with this research that costs need to be as low as possible, and regular visits will be essentially for understanding how receptive people living in rural villages will be to this method of water purification.

This research trip provided me with invaluable insights into the viability of photocatalysis as a point-of-source water treatment method, and has identified crucial areas for further development. Though it is clear much work is still needed to be done, it seems the systems currently being developed within the Robertson Group show strong promise, and the prospect of further investigation is extremely timely as the increase in global population puts even more strain on the existing water sources.