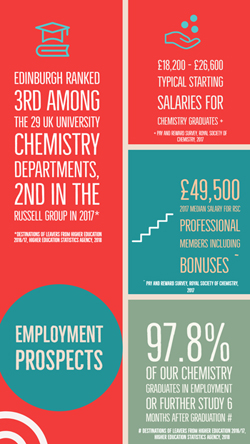 A degree in Chemistry is a wise choice for your future employability and earning potential.

Employers value the transferable skills that a chemistry degree provides, not only for roles as a professional chemist, but also for jobs in other sectors including finance, business, publishing, IT and teaching. Almost two-thirds of chemistry graduates work in settings beyond laboratories. Employers like the scientific and technical knowledge, but also the combination of skills in problem-solving, teamwork, numeracy, research, project and time management, and written and verbal communication that studying chemistry fosters. This is reflected in the very competitive salaries paid to chemistry graduates.

Each year the University of Edinburgh surveys the first employment destinations of its graduates.

Examples of chemistry graduate jobs and employers gathered from the Destinations of Leavers from Higher Education 2016/17 survey: